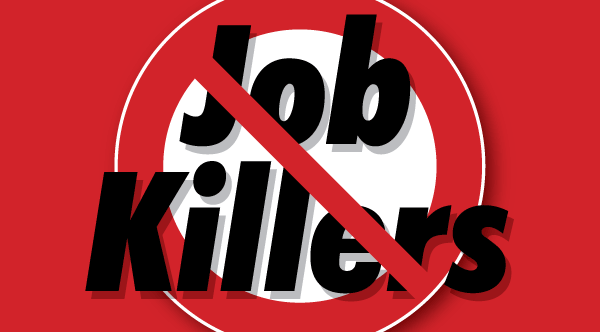 Only two of the 31 job killer bills identified this year by the California Chamber of Commerce have passed out of the Legislature and been sent to Governor Gavin Newsom.

One of the bills, SB 1  (Atkins; D-San Diego), which the Governor has indicated he will veto, threatened to create adverse consequences by impairing the state’s ability to adaptively manage its water supply. The second job killer bill, AB 51 (Gonzalez; D-San Diego), prohibits arbitration of labor and employment claims as a condition of employment.

Another employment-related job killer failed to pass the Legislature on Friday. September 13 was the last day for each house to pass bills, and the Governor now has until October 13 to sign or veto any bills passed.

The CalChamber is asking members to contact the Governor and urge a veto on AB 51.

The CalChamber has tagged AB 51 as a job killer due to the significant increased costs employers will face as a result of more litigation and the expense of delayed dispute resolutions if the bill becomes law. The bill also proposes to add a new private right of action under the Fair Employment and Housing Act (FEHA) and exposes employers to criminal liability for any violation.

The bill would have significantly increased costs on employers engaged in a trade dispute by allowing employees on strike to receive unemployment benefits if the strike lasted more than four weeks, incentivizing strikes, burdening employers, and potentially affecting the solvency of California’s Unemployment Insurance (UI) fund.

In opposing AB 1066, the CalChamber and a coalition of employer groups and local chambers of commerce pointed out that the bill would have created additional solvency issues for the California UI system; and would have burdened even nonstriking workplaces, because nonstriking workers would face increased costs from being forced to pay increased UI premiums.