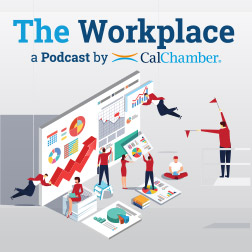 CalChamber has released its 9th episode of The Workplace, a podcast on issues important to California employers and our economy. The subject of this week’s episode is proposed legislation that threatens to establish new challenges for employers by expanding California’s already long list of protected leaves of absence programs. The podcast features Erika Frank, CalChamber Executive Vice President of Legal Affairs and General Counsel, and Jennifer Barrera, CalChamber Executive Vice President.

The first proposal discussed on the podcast is AB 555 (Gonzalez; D-San Diego). The bill seeks to expand the number of paid sick days employers are required to provide from 3 days (24 hours) to 5 days (40 hours).

“It treats a large employer just the same as a small employer with the mandatory number of days that they would have to provide for an employee for paid sick leave,” says Barrera.

Barrera and Frank agree that the other challenging part about the paid sick leave law is that so many local jurisdictions have adopted their own versions.

Barrera says “the challenge of an employer who is operating in multiple locations throughout the state is having to figure out which ordinance applies to their employee at which location and how that interacts with the state leave mandates that are being considered by the Legislature.”

Frank says that this new mandate would be especially difficult for small employers to manage because of workload issues that arise when employees take leave. There are also costs because workload doesn’t disappear when an employee is on leave. Barrera points out that employers either have to pay other employees overtime to get the job done or hire someone on a short term basis, often at a premium.

On top of balancing all the leave programs that are proposed, these bills would also be troublesome for employers due to the fact that they are enforced through a private right of action, which includes recovery of attorney’s fees.

Both Frank and Barrera discuss the fact that it is early in the legislative session and much could change on these measures over the next few months. As these bills make their way through the legislative process, it is important for employers to be aware of the types of proposals policy makers are considering.

Subscribe to The Workplace on Google Play, iTunes, PodBean, Tune In and Stitcher.