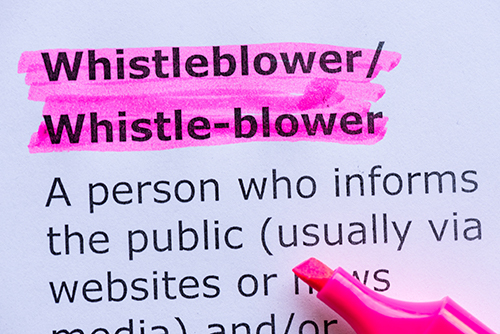 On February 21, 2018, the United States Supreme Court unanimously ruled that employees complaining of securities or other corporate fraud under the Dodd-Frank Act must first go to the Securities and Exchange Commission (SEC) in order to receive anti-retaliation protections. This narrowed definition of who receives whistleblower protection — only those who first go to the SEC — excludes employees who only bring internal complaints and have not reported a securities violation to the SEC (Digital Realty Trust, Inc. v. Somers, No. 16-276 (Feb. 21, 2018)).

The Dodd-Frank Wall Street Reform and Consumer Protection Act (Dodd-Frank) was enacted in 2010 in the wake of the 2008 financial crisis. Dodd-Frank aimed to “promote the financial stability of the United States by improving accountability and transparency in the financial system,” according to the legislative record. To assist the SEC in identifying securities violations, Dodd-Frank established “a new, robust whistleblower program designed to motivate people who know of securities law violations to tell the SEC.” Recognizing that this might mean career suicide, Congress sought to protect whistleblowers from retaliation.

In this case, Paul Somers alleged that his employer, Digital Realty, fired him shortly after he informed senior management that he suspected the company was violating securities laws. Digital realty sought to have the case dismissed on the grounds that Somers was not a whistleblower, as defined by Dodd-Frank, because he did not alert the SEC of his concerns prior to his termination. The Ninth Circuit concluded that Dodd-Frank didn’t require someone to go to the SEC to gain whistleblower status.

But the U.S. Supreme Court disagreed, holding that Dodd-Frank’s explicit definition of whistleblower “does not extend to an individual, like Somers, who has not reported a violation of the securities law to the SEC.”

The Court noted that its understanding of the definition is corroborated by the underlying purpose and design of Dodd-Frank: The core objective is to aid the SEC’s enforcement efforts by “motivat[ing] people who know of securities law violations to tell the SEC.” Congress provided monetary awards to whistleblowers who offered actionable information to the SEC, while simultaneously ensuring that these whistleblowers had heightened protection against retaliation.

What This Ruling Means for California Employers

While the ruling creates a bridge that must be crossed by employees who want to sue under Dodd-Frank, the fact remains that employees who bring internal complaints of suspected legal violations may still be protected under other federal laws and state laws.

For instance, California’s Labor Code provides expansive protections to employees who have reason to believe that their employer is violating laws enacted to protect corporate shareholders, investors, employees and the general public (Labor Code 1102.5).

It’s illegal in California to make, adopt or enforce any rule, regulation or policy to prevent an employee from reporting information that the employee reasonably believes shows a violation of a state, local or federal law. This protection specifically extends to both internal and external reports of alleged misconduct.

Employers, as always, must make sure that complaints are taken seriously and investigated objectively. Employers should take measures to prevent retaliation against whistleblowers, such as carefully reviewing all discipline and termination decisions and watching for subtle signs of retaliation.

CalChamber members can read more about Whistleblower Protections in the HR Library. Not a member? Learn about the benefits of membership.