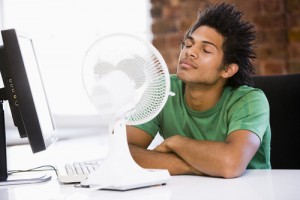 Cal/OSHA recently won a case of first impression before the Cal/OSHA Appeals Board relating to indoor heat hazards.

Many employers are aware that Cal/OSHA regulates heat illness in outdoor places of employment.  Recently, however, the Cal/OSHA Appeals Board ruled in favor of Cal/OSHA in citations against two employers because their Injury and Illness Prevention Programs (IIPP) failed to effectively address the hazard of indoor heat.

All California employers are required to have an IIPP which contains a general plan to keep the workforce free from work-related injuries and illnesses.

“This is the first case of indoor heat considered by the Appeals Board. In this case, the ruling affirms that California’s IIPP standard can be used to address hazards that the standard does not specifically identify, including indoor heat,” said Christine Baker, Director of the Department of Industrial Relations (DIR).

According to a DIR press release, the case stemmed from serious citations issued in 2012 against a temporary staffing agency and a warehouse operator for heat illness suffered by an employee in the summer of 2011. A serious violation is cited when there is a realistic possibility of death or serious harm from the hazard.

In this instance, the worker was hired to work in a warehouse and suffered heat illness while working inside a metal freight container where temperatures rose to above 100 degrees. He reported his illness to his supervisor from the temp agency who arranged for his transportation to a local clinic. He was then referred to the ER. However, the worker did not go to the ER and the next day was hospitalized for three days due to heat stroke.

Both the temp agency and the warehouse operator were fined $18,000 for not implementing an effective IIPP and the companies appealed. An administrative law judge (ALJ) overturned the citations.

Cal/OSHA appealed to the Board, arguing that the ALJ should have upheld the citations because the employers had not effectively corrected the indoor heat exposure hazard and had not trained employees on the hazard of indoor heat exposure and heat illness. The Board agreed with Cal/OSHA.

Importantly, the temp agency was also held responsible. The DIR notes that the decision “reinforces the fact that all employers have a responsibility for ensuring compliance with all Cal/OSHA standards, not just the employer in charge of the worksite.”

For more information on creating an IIPP, HRCalifornia members can visit the Injury and Illness Prevention Program. Not a member? See how HRCalifornia can help you.